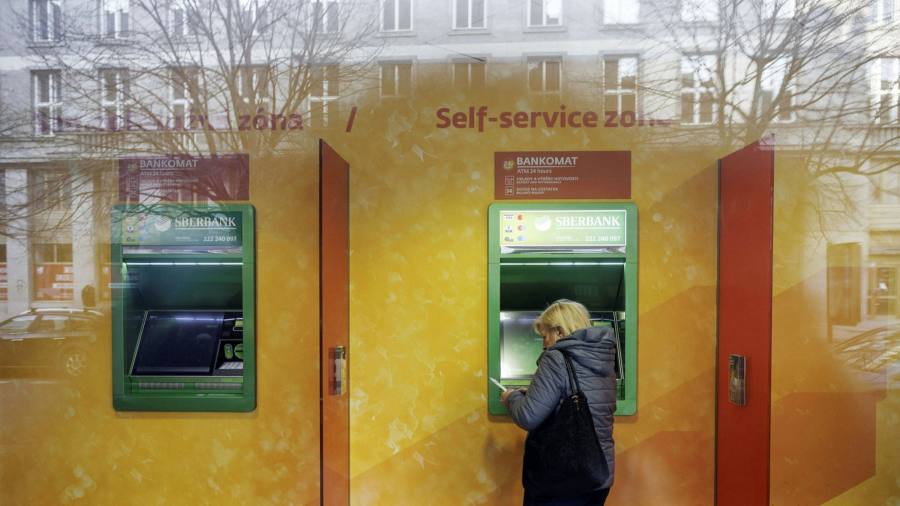 As sanctions against the Russian economy tighten, the European Commission has proposed excluding the country’s largest bank from the global payment system Swift, which provides trillions of dollars in trade every day.

According to plans, Sberbank – along with two other banks – Moscow Credit Bank and Russian Agricultural Bank – will be disconnected from Swift, which acts as an interbank messaging service.

Announcements were made on Wednesday as part of the proposed sanctions package which included a gradual ban on imports of all Russian oil into the EU in response to Moscow’s invasion of Ukraine.

“We are hitting banks that are systematically critical to Russia’s financial system and Putin’s ability to destroy,” European Commission President Ursula von der Leyen told the European Parliament in Strasbourg. “This will strengthen the complete isolation of the Russian financial sector from the world system.”

These steps were taken after the EU’s decision in March before remove seven other Russian lenders – including VTB, the country’s second largest bank – from Swift. In total, 10 banks account for more than 60% of the Russian banking market, with Sberbank controlling a third of the sector.

But while Western sanctions are aimed at destabilizing Russia’s economy and stifling funds for Vladimir Putin’s military machine, recent measures against the financial system will have limited impact, people in the sector say.

It is important, they say, that Gazprombank – the country’s third-largest creditor and a subsidiary of state-owned energy company Gazprom – will be allowed to stay on Swift. The bank, which accounts for 7 percent of the Russian banking market, is the largest player in facilitating payments for Russian oil and gas exports.

“Logically, this means that Gazprombank’s role in promoting oil and gas payments will be strengthened – it is the only Russian infrastructure bank that is not currently under sanctions,” said the head of the Russian banking agency.

Gazprombank avoided EU sanctions. It was added to the UK sanctions list in March, but since then the British government has given a license until the end of May that allows the bank to continue receiving payments to allow the flow of Russian gas to the EU.

The EU will still be able to exclude Gazprombank from Swift later, and this will cause the greatest financial damage to Russian exports, analysts say. But in Brussels, it is seen as a nuclear option, as Europe relies on Russia for more than 40 percent of natural gas supplies and 26 percent of oil.

Swift, a Brussels-owned organization controlled by the G10 central banks, plays a crucial role in global banking, with more than 11,000 financial institutions using the system.

However, the removal from Swift at this stage will not hit Sberbank hard, according to the head of the Russian banking leadership. “Given that the Sberbank is already under sanctions, and only a limited number of payments come from outside Russia, I do not see this as a big problem,” they added.

The state-controlled creditor, which has its roots in the decree of Emperor Nicholas I in 1841, is a European the second largest bank by the number of 102 million customers, almost all of whom are in Russia.

While the Sberbank once harbored ambitions to expand internationally, it has had to refocus on dominating the domestic market after a series of sanctions in recent months. A few hours after Russia’s invasion of Ukraine, Washington cut off Sberbank and 25 subsidiaries of the U.S. financial system and restricted its access to U.S. dollar transactions.

These measures led to the fact that customer deposits in foreign subsidiaries of Sberbank were overcrowded, and the Austrian business of the bank on Wednesday was liquidated.

The Austrian detachment was the first bank failure following the imposition of sanctions on Russia, in March came under special measures under Austria’s deposit guarantee scheme.

The bank employed more than 3,800 people and had 187 branches across Central Europe with assets of 12.9 billion euros and 770,000 customers, according to its latest public corporate documents.

Sberbank did not respond to a request for comment.

Even removing Sberbank and other banks from Swift would not prevent them from conducting cross-border operations, but making it more costly and difficult. Foreign transactions will rely on the use of less efficient means of communication, such as e-mail and telex.

In recent years, the Russian Central Bank has also prepared for such measures by creating an alternative messaging system that is widely used in Russia and a small number of foreign lenders.

However, Western bankers and financial regulators may be concerned responsible cyberattacks in the Swift network in response to the removal of Sberbank – and possibly Gazprombank.

Last month, a top European bank chief told the Financial Times: “We are simulating cyber attacks on institutions like the Fed, but we believe the Swift strike is likely to be retaliation for Russian banks withdrawing it. That would have big implications for the global banking network. ”