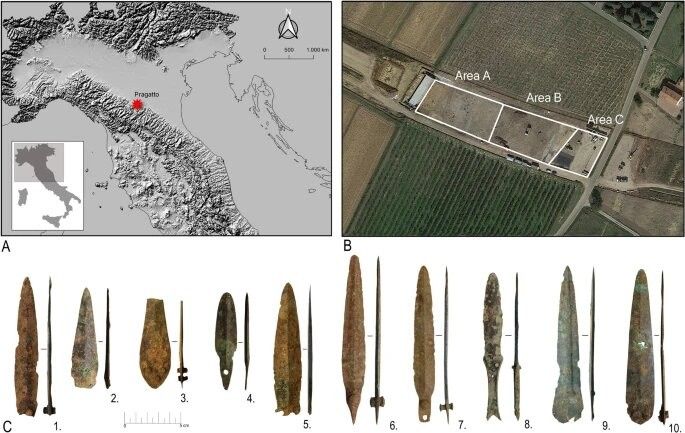 Prehistoric daggers, long considered non-functional ceremonial objects buried in the graves of warriors, were actually used to slaughter and slaughter animals in the early fourth millennium BC, a new study suggests.

Numerous daggers made of copper alloys have been found in the graves of Bronze Age warriors across Europe along with other weapons, and archaeologists have previously suggested that daggers could serve as a status symbol.

But scientists used a new method of analysis on a set of 10 daggers found in Pragata, Italy in 2017 to find evidence that the tools had a more practical purpose.

The new analysis “allowed the world’s first extraction of organic residues”, which showed “for the first time how these objects were used, for what purposes and from what materials,” – researchers from the University of Newcastle in the UK. the statement said.

Related: 10 stunning swords and other ancient weapons found in 2021

The new research process uses a type of diagnostic dye called Pico-Sirius Red Solution (PSR) to stain any organic residue left on daggers, and scientists then examine it under various microscopes (including optical, digital and electronic) to determine , or remains on the blade and probably a human or animal.

Through this process, the research team was able to determine that there were traces of type I and type II collagen (a protein found in skin, tissues and bones, according to Healthline), fiber fibers, muscle and tendon bundles from many animals, the researchers wrote in a study published April 12 in the Journal Scientific reports. This suggests that knives were used several times for various purposes, including for slaughtering animals and cutting meat from bones.

The researchers then independently confirmed their findings through micro-wear analysis (the process of recording traces of wear on artifacts, according to Texas is beyond history) on the remains of slaughtered animals from other Bronze Age monuments, as these bones often have traces of metal cuts, the team writes in the article.

The team also used the skills of a bronze master and obtained a large number of copies of various daggers and knives of the Bronze Age. They then compared the remains on them with the remains of the original daggers and saw that they matched.

“Research has shown that organic metals can be extracted and characterized from ancient metals,” said Andrea Dolphini, a senior lecturer in later prehistory at the University of Newcastle. “The possibilities are endless, as are the answers the new method can and will give in the future.”