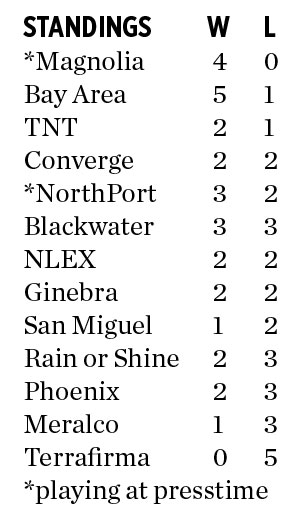 The Bay Area Dragons, demolished by the titan last time, bounced back hard and tore another behemoth to shreds.

Mr. Nicholson’s early fire set the tone as Bay Area grabbed a 20-point lead and never looked back on its way to a huge rebound from its 111-93 loss to Barangay Ginebra a week ago.

“We had a great attitude after that game (loss). We had a great week of practice. We stuck together and took what we did in practice into the game,” said Mr Nicholson, who already had 25 in the first half.

The visiting Hong Kong team improved to 4-1, adding the defending Philippine Cup champions to their casualty list along with unheralded Blackwater, NorthPort, Phoenix and Converge.

“At first we knew we weren’t playing the top teams, and then we met our first opponent (Ginebra) and they beat us. So adjusting that is really important for the confidence of the young guys and for the growth of this team,” Bay Area coach Brian Gurjian said.

CJ Perez (19) and Vic Manuel (15) led the way for the Beermen as import Diamond Stone had a lackluster 11-point performance.

SMB sorely missed six-time MVP June Mar Fajardo, who is out at least four weeks after undergoing surgery for a broken throat. He backed it up during SMB’s 113-105 win over Rain or Shine last Sunday.

“They must have suffered (Mr Fajardo’s absence). He may be the best player in the competition. They played with him and won the championship with him,” Mr. Gurjian said.

“But the great thing about San Miguel, they’ve got tremendous depth, they’ve got the backups, they’re deep in the safeties. They missed him, but they have enough to make us feel good about beating a team of this quality without him.”

The Beermen led 12-7 in the opening minutes and were still in the thick of things in the second period before Mr Nicholson pushed the Dragons to a 58-38 lead. — Olmin Leyba