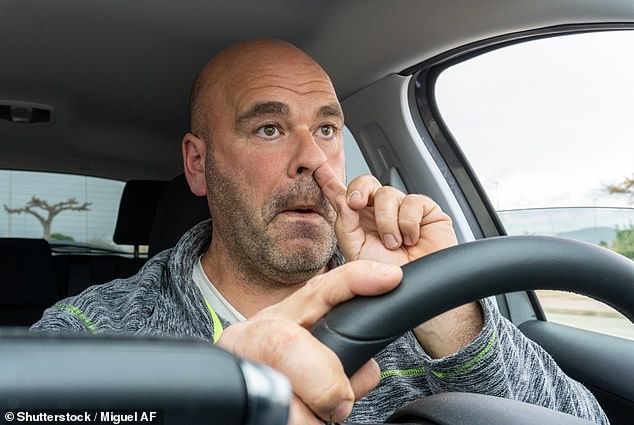 Damage to the inside of the nostrils creates a shortcut for bacteria to enter the bloodstream and travel directly to the brain.

Researchers looked at what happens when the nerve that connects the nose to the brain is exposed to Chlamydia pneumoniae, a normally harmless bug that causes sinus problems.

The study – in mice – found detectable levels of the bacteria in the brain for 72 hours. Within a month, the rodents developed protein plaques associated with Alzheimer’s disease.

The study’s lead author, Professor James St John of Griffith University in Australia, said: “We are the first to show that Chlamydia pneumoniae can enter directly into the nose and into the brain, where it can cause pathologies similar to Alzheimer’s disease.

“We’ve seen this happen in a mouse model, and this evidence is potentially scary for humans as well.”

More than 6 million Americans are affected by Alzheimer’s disease, and 73 percent of people with the disease are over the age of 75.

More than 900,000 people in the UK have a confirmed case of dementia, the main cause of which is Alzheimer’s disease.

The causes of Alzheimer’s disease are still unknown, but obesity, poor diet, loneliness, and lack of sleep are all among the many lifestyle factors associated with the disease.

Nose picking removes mucus and hair, which are part of the body’s defense system against bacteria and other pests (file photo)

Pictured: The peripheral and olfactory nerves of mice were infected with bacteria for several hours. On the left, after three days of the study, the nerves of the mouse in the control group are not affected. On the right, the infection is visible (green)

The team from Griffith University exposed rodents to Chlamydia pneumoniae through their olfactory tract.

This is the path between the brain and the nose – the fastest way for an invader from the outside into the central nervous system.

A very deadly brain-eating amoeba, among other dangerous bacteria, also enters the body and causes damage in this way.

Mice were chosen for the study because their olfactory system functions and is structured similarly to a human’s.

What is Alzheimer’s disease?

Alzheimer’s disease is a progressive degenerative brain disease in which the accumulation of abnormal proteins leads to the death of nerve cells.

This disrupts the transmitters that carry the messages and causes the brain to shrink.

More than 5 million people suffer from the condition in the US, where it is the 6th leading cause of death, and more than 1 million Britons have it.

When brain cells die, the functions they provide are lost.

This includes memory, orientation and the ability to think and reason.

The progress of the disease is slow and gradual.

On average, patients live five to seven years after diagnosis, but some may live ten to 15 years.

Chlamydia pneumoniae is a common bacterium that causes pneumonia, sore throats, ear infections, sinusitis, and other sinus problems when a person is infected.

It can spread through respiratory droplets and travel from host to host through the air.

The body has built-in mechanisms to prevent bacteria from entering the brain, such as the hairs and mucus in the nose, which act as a natural barrier.

When a person picks their nose, they remove some of these natural defense mechanisms.

Professor St John, co-author of the study and head of the school’s Center for Neurobiology and Stem Cell Research, added:

“Pocking your nose and pulling hair out of your nose is not a good idea.”

“We don’t want to damage the inside of the nose, and picking and plucking can do that.

“If you damage the lining of your nose, you can increase the amount of bacteria that can get into your brain.”

The results were published in the journal Scientific reports.

In a study of mice that had bacteria implanted in their olfactory nerves, the brain was infected for 72 hours.

This means that the bacteria were able to cross the “blood-brain barrier” – the final immune defense of the body’s central nervous system.

Infected mice were also found to have damage to the neural pathways in their brains, which could affect their cognitive function, as well as early development of Alzheimer’s disease within 28 days.

The formulation of beta-amyloid plaques was also detected in the brain of mice.

It is believed that the bacterium causes the formation of toxins in the brain.

The clumps block and disrupt communication between neurons and other cellular functions.

Scientists from all over the world could not prove that these plaques are at the center of the formation of the disease.

A key 2006 University of Minnesota study linking the plaques to Alzheimer’s disease was also retracted this summer after it was discovered the results had been doctored.

However, researchers at Griffith University hope they have found a potential source of how this puzzling disease develops.

They may also have discovered that the nose’s defense systems are more important to the brain than previously thought.

Professor St John said his team “need to do this study in humans and confirm whether the same pathway works in the same way.

“This is a study that has been proposed by many people but has not yet been completed. We know that these same bacteria are present in humans, but we haven’t figured out how they get there.”

The Alzheimer’s Association reports that by 2050, the 6 million Americans living with Alzheimer’s will double to 13 million.

One in three elderly people will die from Alzheimer’s disease.