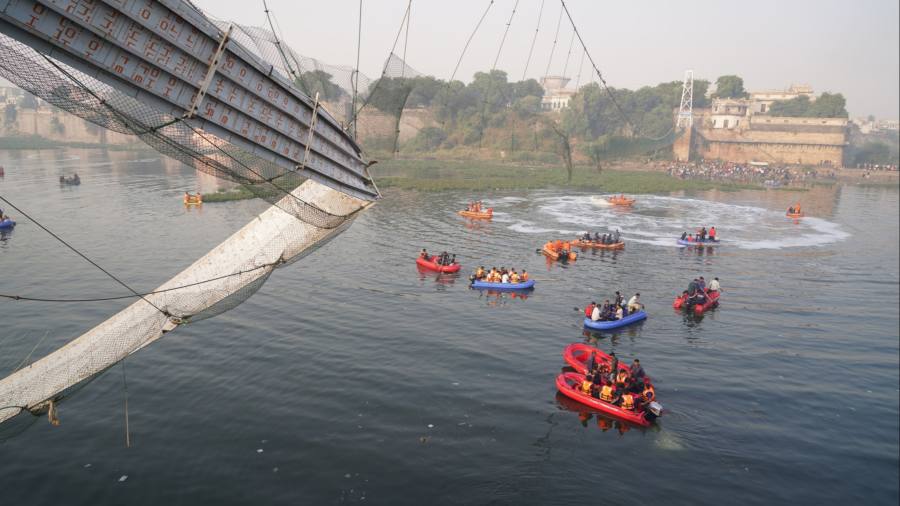 Authorities in Gujarat have launched a criminal investigation into a bridge collapse that killed more than 130 people in the home state of Indian Prime Minister Narendra Modi.

Harsh Sanghavi, the home minister of the western state, announced on Monday that at least 134 people had died after cables snapped on the newly opened Morbi Bridge on Sunday.

Nearly 180 people were rescued, news agencies reported, citing local officials, after emergency workers worked through the night. Authorities have warned that the death toll could rise.

The disaster threatens to overshadow Modi’s three-day visit to Gujarat, where legislative elections will be held this year.

The Prime Minister canceled one event with local organizers from his local Bharatiya Janata Party mass media informed. But Modi still plans to inaugurate several development projects in the state, which he led as chief minister from 2001 to 2014.

“Rarely in my life have I felt such pain,” Modi said of the Morbi bridge disaster during a public address Monday on the birthday of Vallabhbhai Patel, India’s first home minister and deputy prime minister since the country gained independence from Britain.

Footage showed chaotic scenes as rescuers pulled people out of the Machchu River and others clung to the remains of the hanging pedestrian suspension bridge, a popular attraction sold by Gujarat Tourism as a “nostalgic reminder of Victorian London”.

Length 233 m, colonial era the bridge was reopened less than a week before the tragedy after being repaired by a private company.

The chairman of Morbi municipality, Sandeep Jalla, said the local council “has not yet issued a certificate of suitability” after the renovation, according to the BBC.

India’s armed forces joined the rescue effort, while the BJP-controlled state government of Gujarat said a high-level committee would be set up to investigate the disaster.

CCTV footage taken on the bridge at the time of the accident shows several men deliberately trying to rock the suspension bridge back and forth before the cables supporting the structure snap, sending dozens of people plunging into the water.

Hundreds of visitors descended on the bridge, a popular tourist attraction for ticket sales, during the Indian holiday of Diwali when it collapsed. Among the victims were women and children.

It is one of the deadliest accidents in the region since the Macchu River dam burst in 1979, which killed hundreds of people.