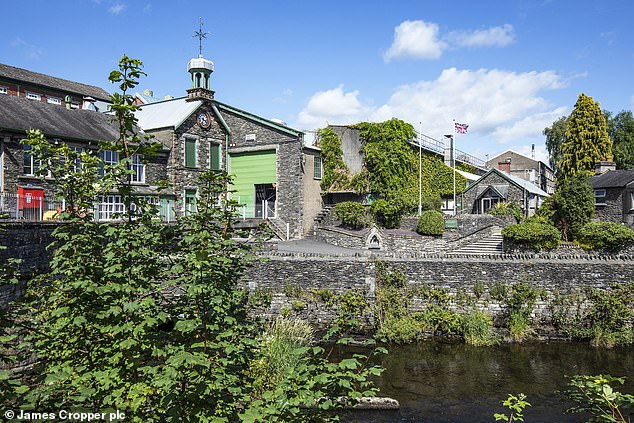 James Cropper has more than halved profit forecasts as soaring electricity and raw material costs over the summer cut sharply into the group’s margins.

The papermaker now expects to post adjusted pre-tax profits of £2.3m for the year ending March 2023, down from a previous forecast of £5.4m, even as demand continued to grow across all divisions.

The Cumbrian company said its energy costs had soared by almost 150 per cent this year due to a sharp rise in wholesale gas prices, exacerbated by spikes in late July and early August.

Papermaker: James Cropper, based in the same village where it was founded, is famous for producing colored paper for companies in a wide variety of industries.

The cost of raw materials, which make up a larger share of total costs, faced “unprecedented inflationary headwinds” after rising 20 percent from a year earlier, the group said.

James Cropper has passed on much of this extra cost – running into millions of pounds – to consumers through higher prices and extra energy charges.

However, the late timing of these measures meant that its profits were still badly hit, particularly in its paper business, whose clients include high-profile brands such as Selfridges, Mulberry and Burberry.

This came despite the firm’s revenue rising 26 per cent in the first six months of the financial year, including a 36 per cent rise in the first quarter.

In the recent period, its Colourform division has successfully won new contracts in the premium wine, spirits and beauty sectors, while the paper division has won several luxury packaging contracts.

James Cropper Stock plummeted 14.6 per cent to £8.50 on Monday, making it one of the ten worst performers on the junior AIM market.

But while the group warned of low profits, it expects volumes to increase further this year, supported by a full order book and the UK government’s Energy Bill Relief programme, which offers discounts on electricity bills for British businesses.

In addition, the company said it has added coating capacity at the US production of TFP Hydrogen, an electrochemical subsidiary, as well as embossing and varnishing capacity in the paper division.

Founded in 1845 in the village of Burnside near Kendal, where it still lives today, James Cropper is renowned for producing colored paper for companies in a wide variety of industries.

From the late 1970s, it supplied the red paper used in the Remembrance poppies sold by the Royal British Legion, replacing the previous cloth poppies.

The company also pioneered the recycling of disposable coffee cups CupCycling technologywhich removes the plastic lining from the cup and turns the remaining material back into paper.

According to the website, James Cropper’s recycling facility has enough capacity to process around 500 million cups a year, which is around one-fifth of all the paper coffee cups thrown away in the UK each year.