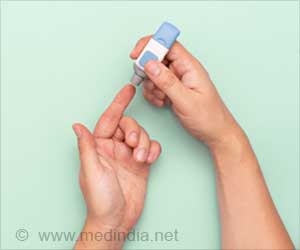 Modern drugs used to treat diabetes, such as exenatide and liraglutide, mimic GLP1 and bind to GLP1R to induce insulin release. However, these drugs are injected, they are expensive and unstable after administration.

“We strive to find simpler drugs that are stable, cheap and effective against type 1 and 2 diabetes“, – quotes the release of the author of the study, Dr. Pressendit Mondala, Associate Professor of the School of Basic Sciences.

The researchers found that PK2 is rapidly absorbed in the gastrointestinal tract, meaning it can be used as an oral medication rather than as an injection.

After two hours of administration, PK2 was detected in the liver, kidneys, and pancreas of mice, but traces of it in the heart, lungs, and spleen were absent.

A small amount was present in the brain, indicating that the molecule could cross the blood-brain barrier. It was removed from circulation in about 10 hours, the release said.

“In addition to increasing insulin release, PK2 has also been able to prevent and even reverse the loss of beta cells, the cells needed to produce insulin, making it effective in type 1 and type 2 diabetes.Said Dr. Mondal.

To test the biological effects of PK2, the researchers injected it orally into experimental mice with diabetes and measured glucose levels and insulin secretion. In mice receiving PK2, serum insulin levels increased six-fold compared with controls.