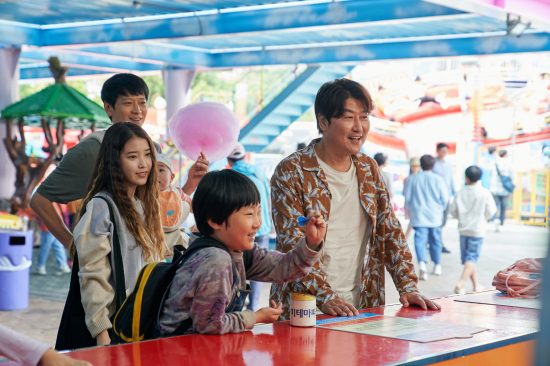 A police investigation into a child boxing ring in a church that was used for human trafficking intertwines the lives of those involved in the case.

In the pouring rain, a young woman leaves her baby on the ground near a baby box in a local church; she is being watched by two police officers who are conducting a check on the involvement of members of a religious organization in human trafficking. Inside the church, the videotape is erased as a volunteer and a part-time employee plan to make a deal with clients willing to pay for illegal adoptions. Complications arise when the real mother returns and in the process becomes part of a scheme to sell her child.

As in the case Shoplifters, Hirakazu Kore-eda aptly explores family dynamics, bringing people together by circumstance rather than blood. The various storylines converge at the conclusion, but the film’s driving force is the stellar performances of the cast. The best scenes are those that unfold with Kang-ho song image of the owner of a hand laundry in debt to a gangster, Gang Dong-won how an orphan became a church worker Lee Ji Eun as the mother of an unwanted child, and Im Seung Su like a homeless orphan interacting with each other. It is more difficult to play the role of a cold, distant, unsympathetic Det. Soo Jin Bae Duna; it is through her and her colleague that a narrative bridge is created between the audience and the world of the two brokers, the mother, the child, and the orphan.

Sometimes the music gets a little too bloated, but there are some really interesting choices, like when the heroine makes an emotional revelation on the train as she walks in and out of the darkness. The real strength lies in the cast, and Kore-eda does nothing to distract from their performances. Such nuances add realism as the back door of the van requiring a rope to close properly, the incessant discussion of a child’s eyebrows and the discovery of a stowaway who immediately flees to the toilet. It’s impressive how Kare-eda can imbue those who commit vile deeds with so much humanity and warmth to the point that you forgive them for their transgressions and enjoy the journey along the way.

Trevor Hogg is a freelance video editor and writer currently living in Canada; it can be found at LinkedIn.