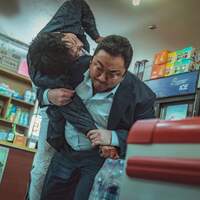 The 28th edition of the L-Etrange began this week and South Korea is definitely in the house this year.

There are a number of interesting retrospective programs at this year’s festival. There are tribute programs devoted to Japanese director, Masahiro Shinoda, Filipino director Mike de Leon and American queer artist Steven Arnold. Other provacative programs have been curated by British performance artist Cosey Fanni Tutti, “former adult star, writer and militant feminist” Ovidie, and Tie Me Up! Tie Me Down! actress Victoria Abril.

It all adds up to a very diverse and broad selection of films being showcased at this year’s festival. The full lineup and announcement follow.

L’Étrange Festival’s 28th edition will take place from September 6 to 18 at the Forum des images (Paris) and offer, as per its longstanding credo, a showcase of wonderfully weird movies to sate adventurous moviegoers’ appetites. The 13-day movie madness extravaganza is set to present 80 feature-length films and 56 short films from 29 countries under 2 competitive and 3 non-competitive sections.

Former adult star, writer and militant feminist Ovidie will host a special program dedicated to Neuroatypical artists. ‘’My aim’’, said Ovidie, ‘’is to share and showcase the breadth of talent, sheer force and furious creativity of those outlier artists who, for want of a better word, do not follow the majority’s neurological behavior.’’

A frequent collaborator, if not to say muse, of Vincente Aranda and Pedro Almodóvar, the ever charismatic Victoria Abril will present in the flesh 4 of her earlier and more provocative films, showing her versatility but also readiness to take on daring roles.

In addition to presenting his latest film – Unicorn Wars, a truly psychedelic anti-war parable with religiously bigoted teddy bears and environmentalist unicorns – Alberto Vázquez will take a deeper look into his body of work, starting with Birdboy (2011) up to Homeless Home (2020) through his first feature-length film, Birdboy:The Forgotten Children (2015).

Prior to the Closing and Award ceremony, a brand new restoration of Friedrich Freher’s masterpiece The Robber Symphony (1933) will have its World General Delegate, presented and accompanied live on piano by renowned film preservationist Serge Bromberg.

12 feature-length films – representing 8 countries, with a particularly strong presence of South Korea – have been selected this year for the ‘’Nouveau Genre’’ competition strand. Among the films that will vie for the coveted Canal+ Grand Prize are:

• German/Romanian Orwellian satire chock full of existential dread We Might As Well Be Dead.

Upon deliberation by a jury composed of industry professionals, the winning film will be acquired by French premium Pay-TV Canal+ for future broadcast. Canal+ is also partnering with L’Étrange Festival to award the most strikingly original short out of 55 shortlisted oddities divided into 7 thematic blocks.

Central to both these sections’ mandate is bringing together audacious filmmakers and audiences seeking fresh perspectives far away from the dominant tent-pole culture. Whether it’s Masaaki Yuasa’s Inu-Oh (a psychedelic anime rock opera about a blind musician and a physically deformed amateur dancer who achieve superstardom in 14th-century Japan), Sebastien Marnier’s The Origin of Evil (a particularly deft combination of high melodrama and psychological horror), Adilkhan Yerzhanov’s Assault (a hostage-and-siege movie of the farcical kind, chok-full of social undertones) or Harry Cleven’s uniquely disquieting stop-motion animation film Zeria, rabid filmgoers will have plenty to feast their eyes on and debate about.

Although Masahiro Shinoda has never enjoyed the same critical reverence as other Japanese New Wave auteurs of the 60s (Nagisa Oshima or Shohei Imamura), he is nonetheless one of the most essential Japanese directors of the 20th century.

‘’As part of the tribute, we will showcase no less than 11 films’’ said General Delegate Frédéric Temps – among which the seminal Double Suicide, Pale Flower and Silence but also the lesser known Himiko or My Face Red In The Sunset.

Pale Flower and Gonza The Spearman will be presented in a brand new 4K restoration. Assassination, Himiko, Under the blossoming cherry trees, Samuraï Spy and The Ballad of Orin will be projected from 35mm prints.

Masahiro Shinoda said ‘’In my ninety first year, I have learnt that L’Étrange Festival was hosting a special overview program of my Works. Coming now at the end of my natural life, this news goes straight to my heart.’’

No less significant a filmmaker is Mike de Leon, one of the more original and bold voices of Philippine cinema. ‘’Although his output is relatively limited’’ said International programmer Marc Troonen, ‘’his body of work is unlike any other of his generation.‘’

As part of the tribute, Itim, Will Your Heart Beat Faster, Kisapmata and Batch’81 will be presented in a brand new 4K restoration.

In addition to Luminous Procuress, Arnold’s flamboyant avant-garde masterpiece from 1971, a program comprised of his earlier shorts and the Steven Arnold: Heavenly Bodies documentary will be shown to provide greater context to his fantastical career and unconventional lifestyle.

‘’Cosey Fanni Tutti’s carte blanche has been a long time coming’’ shared Frédéric Temps. “Covid ultimately decided otherwise (not once but twice). The films she curated are not only étrange to their very core but are also a perfect reflection of her own artistic journey and experiences.’’

Beyond the Valley of the Dolls (Russ Meyer)

Cosey Fanni Tutti: The film starts off crazy and gets crazier and crazier, the pace of insanity escalating into a frenzy […]. It’s a great, fun, hugely satirical snapshot of America in the late 1960s / early 1970s.

In the Realm of the Senses (Nagisa Oshima)

Cosey Fanni Tutti: [It] was released when I was working in the sex industry in the 1970s. The sex magazines featuring me were banned from being exhibited. So when word about Oshima’s film got out I was eager to see it. He seemed to be making a stand against censorship and oppression and exploring sexuality, all things I was deep into at the time.

In the Shadow of the Sun (Derek Jarman)

Cosey Fanni Tutti: I knew Derek Jarman back in the late 1970s when Throbbing Gristle were active. In 1980 he asked us to compose a soundtrack to this film. It seemed a novel idea and we approached it as a special ritual in itself by recording it

in an old mortuary very late at night to create an eerie atmosphere. We took all our audio equipment and instruments and recorded ourselves improvising live as we watched the film on a small TV monitor.

‘’What makes L’Étrange so unique is that it is neither a traditional arthouse nor a pure genre film festival’’ said Frédéric Temps. ‘’It’s somewhere in between. Right from the start, our focus was on bridging the gap between what are often seen as radically opposite filmmaking styles, genres, narratives or audience sensibilities which may explain why, after 28 years, the event remains young at heart (70% of his viewers are in the 18 to 32 age group).’’

– SICK OF MYSELF dir. KRISTOFFER BORGLI

– SHOWCASE ASTÉRÉOTYPIE followed by a Q/A with the band

– DERAILROADED: INSIDE THE MIND OF LARRY «WILD MAN» FISCHER

– IN THE REALM OF THE SENSES dir. NAGISA OSHIMA

– IN THE SHADOW OF THE SUN dir. DEREK JARMAN (short)

– BEYOND THE VALLEY OF THE DOLLS dir. RUSS MEYER

– THE SPIRIT OF THE BEEHIVE dir. VICTOR ERICE

– BEING THERE dir. HAL ASHBY

– THE LIBERATION OF THE MANNIQUE MECHANIQUE dir. STEVEN ARNOLD (short)

– MY FACE RED IN THE SUNSET dir. MASAHIRO SHINODA

WELCOME TO THE VILLAGE

– THE PIT AND THE PENDULUM dir. ALEXANDRE ASTRUC (short)

– NO ONE WILL SPEAK OF US WHEN WE’RE DEAD dir. AGUSTIN DIAZ YANES

(Editor’s Note: In the interest of transparency I do serve as a North America consultant for L’Etrange. Not as active this year due to personal concerns I do act when called upon by the festival)