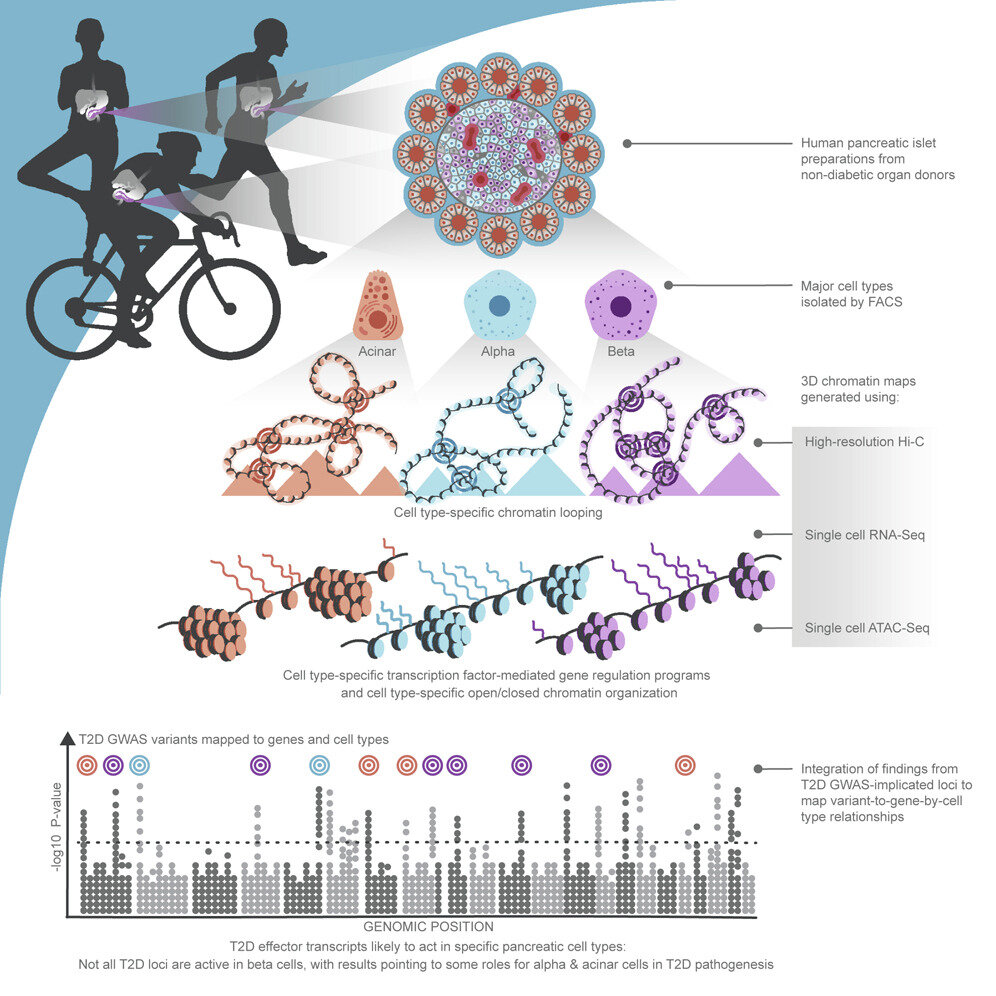 Researchers at the Children’s Hospital of Philadelphia (CHOP) used advanced three-dimensional imaging techniques at the microscopic level to identify multiple genetic variants and corresponding combinations of target genes in the pancreas that are associated with type 2 diabetes. In addition to these discoveries, the resulting datasets will serve as a key resource for researchers worldwide to delve deeper into the genetic origins of type 2 diabetes and further explore the role of different cell types in the development of the disease.

The findings were published today in the journal Cellular metabolism.

Type 2 diabetes mellitus cases are increasing and patients are being diagnosed earlier than what has been seen historically. However, while many cases can be attributed to the rise of obesity and sedentary lifestyle, increasing evidence suggests a significant role for genetic risk factors in this relatively common disease. Previous genome-wide association studies (GWAS) have identified hundreds of genetic variants associated with an increased risk of type 2 diabetes.

One of the challenges in studying genetic variants is the notion that chromosomes function tightly packed inside microscopic cells. If the DNA of a single cell were stretched end to end, it would be over six feet long. Protein complexes called chromatin fold the chromosomes and compact them into each cell. Thus, genes and variants that appear distant and unrelated on a one-dimensional genome sequence map may be closely related in 3D within the cell, helping to explain how genetic diseases arise.

“If you don’t have a clear map of how genes fit together in a cell, you’re essentially guessing at the role that these genetic variants play,” said one of the study’s senior authors, Andrew D. Wells, Ph.D. Associate Professor of Pathology and Laboratory Medicine and Director of Collaborative Spatial and Functional Genomics at CHOP. “In this study, we applied three-dimensional chromosome mapping techniques to highly relevant cell types, which allowed us to identify a number of genes that had never before been implicated in type 2 diabetes.”

In this study, the researchers created three-dimensional epigenomic profiles of acinar, alpha, and beta cells in the human pancreas using a variety of techniques that examined each at the single-cell level. By comparing these profiles, the researchers found differences in how the chromatin was compartmentalized, how the chromatin was coiled, and how genes were regulated and transcribed. As a result, the research team identified a number of causative variants and target gene pairs in 194 different signals of type 2 diabetes using a three-dimensional chromatin cards. In addition, the study showed that alpha and acinar cells probably play a greater role in the development of type 2 diabetes than previously thought.

One limitation of the article is that these new combinations of gene variants have not been fully validated in functional follow-up studies. However, the purpose of this paper was to provide important information for various laboratories to further investigate and confirm these discoveries.

“Previous studies support many of the conclusions we made in this work, and with the help of additional testing and imaging tools, more aggressive factors in the pathogenesis of type 2 diabetes can be identified at the genetic level,” said one of the senior leaders of the study. authors Struan FA Grant, PhD, other director of the Center for Spatial and Functional Genomics and the Daniel B. Burke Chair in Diabetes Research at CHOP. “We believe the results of this study will serve as an important resource for the diabetes research community.”

The other senior author was Klaus Kästner of the Department of Genetics at the University of Pennsylvania.

New genetic markers for a rarer form of type 1 diabetes