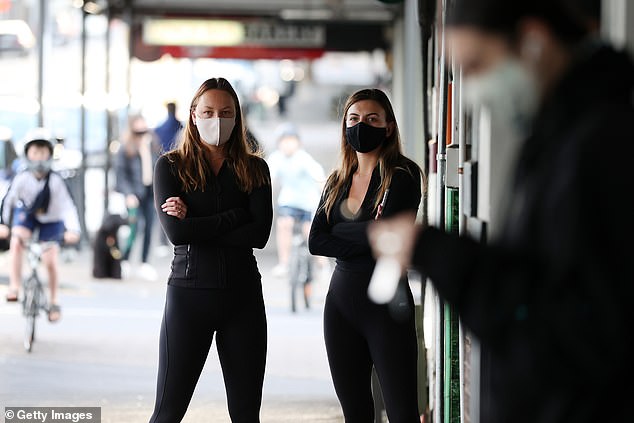 New Zealanders are likely to see their freedom back as early as next week as the government considers scrapping the ‘traffic light’ response system used during coronavirus pandemic.

The Cabinet is set to decide on Monday whether to lift the remaining Covid-19 restrictions, which will see mask mandates lifted by next Wednesday.

In December 2021, the country established a system of traffic lights with green, orange and red levels to manage and reduce Omicron flashes.

This setting is used to classify Covid alerts, with the country currently at the orange level.

This means Kiwis must wear a mask in most places – including on public transport and in supermarkets.

Some government ministers have debated the effectiveness of the restrictions and support among weary New Zealanders is waning (pictured, Kiwis waiting for coffee in Auckland)

But otherwise, they are free to go about their daily lives while being encouraged to “protect vulnerable communities”.

The rules are strengthened in closed spaces when the traffic light is red, and when it is green, there are no restrictions.

On the green, masks are not mandatory and there is no need to do QR scans on the ground, but some health advice remains, such as encouraging people to stay at home if they are sick. 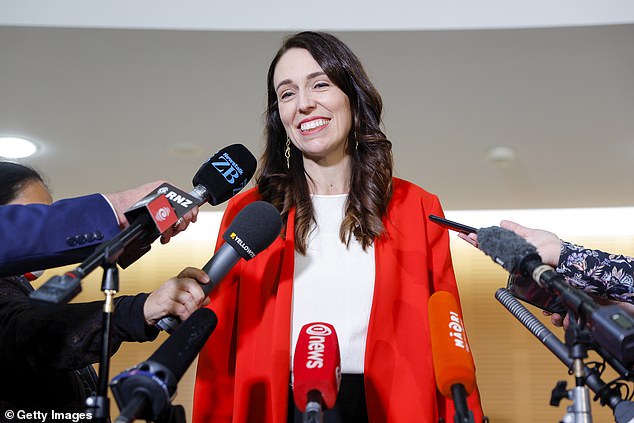 The Cabinet will consider a recommendation to scrap the traffic light system rather than go green as the number of cases in the country continues to fall.

If the framework is lifted, it will end more than two years of Covid-19 regulations for New Zealanders.

Kiwis on the streets told New Zealand Herald they finished the mandates and the country should be more like Europe, where it is “much freer”.

“I think Covid has gone into flu and no one is taking it seriously – [they should be enforced in] in situations like hospitals where people are more susceptible,” said one.

Another person who works at the supermarket said it was “disappointing” because 50 per cent of shoppers weren’t wearing masks – people don’t care anymore, she said. 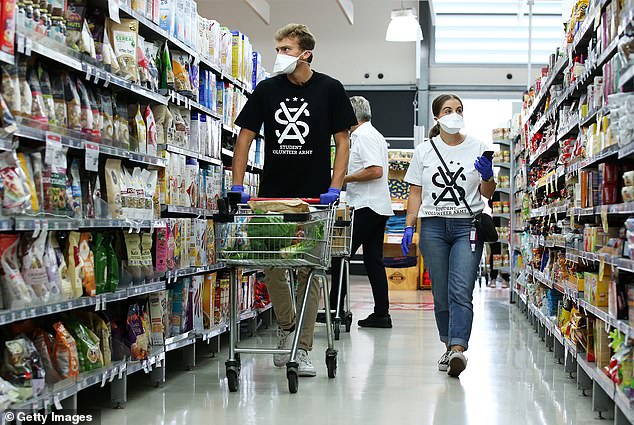 Prime Minister Jacinda Ardern hinted at scrapping the traffic light system for months until the Omicron outbreak peaked and hospitals were under less pressure.

“We’re looking in much better shape than we were even six to eight weeks ago, so we’re just looking to see if we can start to make some changes there,” Ms Ardern told media on Wednesday.

The decision to withdraw the framework is based on consultation with the Minister for Health and the Director General of Health.

Some ministers have debated the effectiveness of the restrictions, and their support is waning among jaded New Zealanders.

If the Cabinet of Ministers agrees to abolish the system, the disease will be treated like the flu.

But the government will severely constrain a rapid recovery of the response if a new and stronger variant starts wreaking havoc.

And it explores longer-term proposals for managing the pandemic in the future.

Health officials may still enforce mask requirements in health care settings such as hospitals and may recommend wearing them on public transportation.

But businesses and suppliers will have the freedom to enforce mask-wearing as they see fit, the New Zealand Herald reported.

According to him, two-thirds of them either ignore the rule or have exceptions. 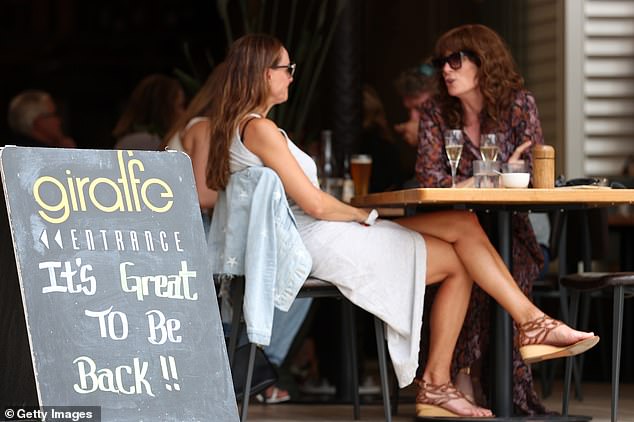 Despite harsh criticism from some in the country for the restrictions, Jacinda Ardern has repeatedly defended the rules, saying they save lives (pictured, guests at a restaurant in Auckland)

“It’s all nonsense and the sooner we can get beyond it the better,” Mr Hartford said on Thursday.

It comes as Ms Ardern opened the country’s borders to travelers in August as cases began to fall after a resurgence in July.

Until last year, New Zealand had a zero-covid policy – the population remained largely free of the virus due to strict lockdown measures, aggressive contact tracing and border controls that trapped some of its own citizens outside the country.

Despite fierce criticism from some in the country about the restrictions, Ms Ardern has repeatedly defended the rules, saying they save lives.

But the government finally admitted last October that it could no longer go without Covid.

At the time, fewer than 30 deaths were reported in the country of five million. 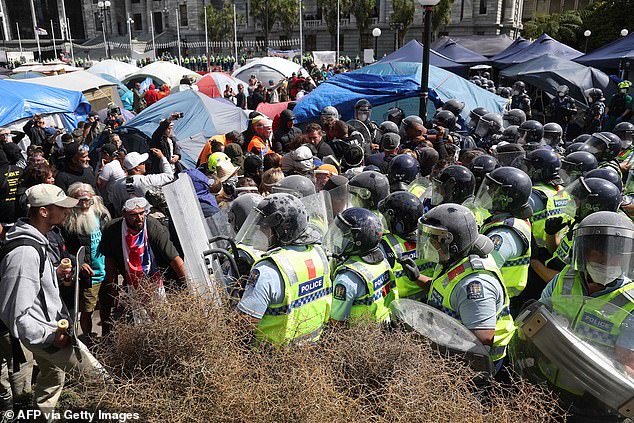 Protesters gathered in the capital Wellington (pictured) earlier this year, culminating in violent clashes that saw them expelled from New Zealand’s parliament

Most recent virus restrictions, including restrictions on gatherings and vaccine mandates, were lifted at the start of the year.

But health authorities last July brought back free face masks and Covid tests to control the latest outbreak, which has put pressure on hospitals.

Meanwhile, in March and February, anti-vaccine and anti-Covid mandate protesters drove in convoys to the capital Wellington, refusing to leave.

Their stay ended in a violent showdown that saw them expelled from New Zealand’s parliament.

A crowd of 2,000 demonstrators, organized by the Freedom and Rights Coalition, returned last month to protest a range of issues, including the lifting of Covid-19 regulations.

16 March 2020: Mandatory self-isolation for all new arrivals to the country, including New Zealanders.

March 19: All non-residents and citizens are barred from entering the country under an international border ban.

March 25: A nationwide lockdown is imposed, with only essential services allowed to operate. At this stage, New Zealand has recorded 102 cases and 0 deaths.

8 June 2020: Ardern announces no new community transmissions in the past two weeks and says New Zealand has eliminated Covid transmission.

February-March 2021: Auckland goes into lockdown again as three new cases of Covid are reported in the community.

August 17: All of New Zealand re-imposes Level 4 lockdown for two weeks as one new case is reported in the community.

October: A traffic light system is in place to prevent unvaccinated residents from entering businesses, gyms and hair salons in “red” or “amber” warning zones.

December: The government postpones the planned resumption of its border in February due to the spread of the Omicron variant.

December 21: The length of stay of people in managed isolation and quarantine (MIQ) is increased to 10 days.

January 2022: Public response to major events and sporting events is limited to a maximum of 100 people under Covid Red Alert measures.

January: Ardern announced she had canceled her own wedding after nine new cases of Omicron were reported.

February: The government announces a plan to reopen the country with New Zealanders and eligible travelers from Australia eligible to skip quarantine as long as they self-isolate for 10 days.

March 2: Vaccinated travelers entering the country are no longer required to self-isolate upon arrival.

May 2: Travelers from the UK and other visa-free countries are allowed to enter the country without self-isolation.

August 2022: The New Zealand government lifts restrictions to allow all travelers to enter the country, provided they are vaccinated and take two rapid antigen tests on arrival.