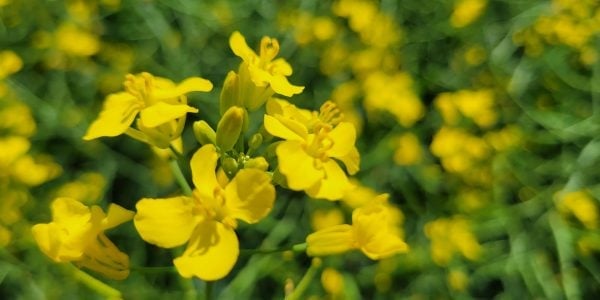 A new report commissioned by Fertilizer Canada and the Canola Council of Canola shows that expanding 4R management practices could lead to a 14 per cent reduction in greenhouse gas emissions from nitrogen fertilization — about halfway to the Canadian government’s 30 per cent reduction target by 2030.

The study, published on September 6, compares the impact of 4R (Right Source, Right Rate, Right Time, Right Place) practices on emissions and farm economics, depending on the level of application and whether yields increase between now and 2030.

“I think the government has set a desirable target of 30 percent,” explains Karen Proud, CEO of Fertilizer Canada, in the video below. “Our research shows that with current practices, current technology and what we know about adopting the 4R nutrient management program, we think we can get about half of that by 2030, which to me is great news.”

The 14 percent absolute reduction is based on an average scenario with “aggressive but achievable” levels of 4R BMPs adopted on farms across the country and yield increases.

They also note that the required level and type of BMP adoption—and thus the cost of adoption—varies by region of the country.

Karen Proud, CEO of Fertilizer Canada, joined Sean Haney on RealAg Radio’s “After Show” on September 6 to discuss a new report on how adopting 4R practices can reduce emissions and impact farm profits, next steps federal government, and more:

Federal Agriculture Minister Marie-Claude Bibeau responded positively to the Fertilizer Board of Canada/Canola report in a statement released to RealAgriculture during a visit to the Liberal cabinet in Vancouver, British Columbia.

“I welcome the findings of the Fertilizer Canada report that almost half of this goal can be achieved without yield reductions with wider adoption of the 4R Nutrient Stewardship program. This program saves money, produces more and reduces emissions at the same time. While this industry report focuses on its own nutrient management initiative, there are several other ways to reduce emissions from fertilizer application,” Bibeau said, without elaborating on what she meant by “other ways.”

“I think it’s very, very positive… I’d like to see details about these other methods,” Proud says after hearing Bibeau’s statement.

She notes that Canadians have shown they want the government to focus on food security, citing a public opinion poll conducted by Abacus Data in late August that found 64 percent of Canadians agree the country should focus on food production , even if it means not achieving a 30 percent reduction in fertilizer emissions.

With food security a priority, Proud says the requirement that yields not fall should force the government to focus on achieving the 14 percent reduction outlined in that report.

“I hope we don’t fight in the second half. I don’t think there is necessarily another half at this stage. I think we’ve offered a very comprehensive view of what can be achieved using modern agricultural practices at more advanced levels,” says Proud, noting that ultimately it all comes down to whether farmers will adopt the practices. “We may have a report that says we would like to achieve 50 per cent implementation of best practices, but it will not achieve anything if the farmers are not involved. And so I think the real challenge now is working with the government to engage at the farm level to find out what it takes. How to support the farmer? What incentives lead us there? Because otherwise it’s all just academic.”

“There is no intention to go in a regulatory direction,” says Minister Bibeau regarding the fertilizer emissions target