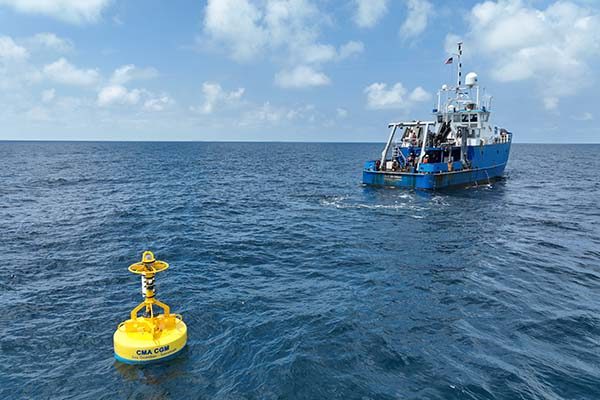 After being hunted for valuable oil for centuries, the North Atlantic right whale is today one of the most endangered species in the world, with a population of only 336 animals. And while they are no longer harassed by whaling ships, the mammals still face threats from ships, including the risk of colliding with container ships near busy ports.

In response, the French giant of container transportation The CMA CGM Group has teamed up with the renowned environmental group of the Woods Hole Oceanographic Institution (WHOI) for the protection of whales. The partners recently launched their second acoustic monitoring buoy, now floating about 39 miles off the coast of Savannah, Georgia, after dropping another buoy into the ocean 33 miles off Norfolk, Virginia, a month earlier. These floating microphones will record whale songs, helping experts detect and monitor the location of right whales, then alert nearby mariners to avoid deadly collisions with passing cargo ships.

“This buoy deployment is a great addition to the network of buoys along the East Coast that seek to protect marine flora and fauna, including the critically endangered North Atlantic right whale. The savanna route is a high-traffic area, making it an important place to use this technology to avoid collisions and protect species,” said Mark Baumgartner, project principal investigator and WHOI marine ecologist. in issue.

CMA CGM says these buoy launches reaffirm its commitment to preserving marine biodiversity in the U.S. and around the world. On the east coast of the US and Canada, CMA CGM requires its vessels to reduce their speed to a maximum of 10 knots in certain areas recognized as cetacean breeding grounds. On the West Coast, CMA CGM has voluntarily committed to a Green Flag speed reduction program that has been implemented in the reserve off the Santa Barbara Islands.